What are the Seismic Effects on Structures?

What are the Seismic Effects on Structures?

Earthquake causes shaking of the ground. 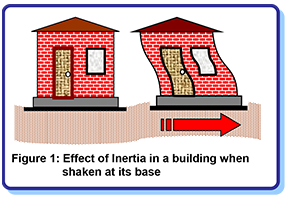 So a building resting on it will experience motion at its base. From Newton’s First Law of Motion, even though the base of the building moves with the ground, the roof has a tendency to stay in its original position. But since the walls and columns are connected to it, they drag the roof along with them. This is much like the situation that you are faced with when the bus you are standing in suddenly starts; your feet move with the bus, but your upper body tends to stay back making you fall backwards!! This tendency to continue to remain in the previous position is known as inertia. In the building, since the walls or columns are flexible, the motion of the roof is different from that of the ground (Figure 1).

Consider a building whose roof is supported on columns

(Figure 2). Coming back to the analogy of yourself on the bus: when the bus suddenly starts, you are thrown backwards as if someone has applied a force on the upper body. Similarly,when the ground moves, even the building is thrown backwards, and the roof experiences a force, called inertia force. If the roof has a mass M and experiences an acceleration a, then from Newton’s Second Law of Motion, the inertia force FI is mass M times acceleration a, and its direction is opposite to that of the acceleration. Clearly, more mass means higher inertia force. Therefore, lighter buildings sustain the earthquake shaking better.

Effect of Deformations in Structures

The inertia force experienced by the roof is transferred to the ground via the columns, causing forces in columns. These forces generated in the columns can also be understood in another way. During earthquake shaking, the columns undergo relative movement between their ends. In Figure 2, this movement is shown as quantity u between the roof and the ground. But, given a free option, columns would like to come back to the straight vertical position, i.e., columns resist deformations. In the straight vertical position, the columns carry no horizontal earthquake force through them. But, when forced to bend, they develop internal forces. The larger is the relative horizontal displacement u between the top and bottom of the column, the larger this internal force in columns. Also, the stiffer the columns are (i.e., bigger is the column size), larger is this force. For this reason, these internal forces in the columns are called stiffness forces. In fact, the stiffness force in a column is the column stiffness times the relative displacement between its ends.

Earthquake causes shaking of the ground in all three directions – along the two horizontal directions (X and Y, say), and the vertical direction (Z, say) (Figure 3). Also, during the earthquake,

the ground shakes randomly back and forth (- and +) along each of these X, Y and Z directions. All structures are primarily designed to carry the gravity loads, i.e., they are designed for a force equal to the mass M (this includes mass due to own weight and imposed loads) times the acceleration due to gravity g acting in the vertical downward direction (-Z). The downward force Mg is called the gravity load. The vertical acceleration during ground shaking either adds to or subtracts from the acceleration due to gravity. Since factors of safety are used in the design of structures to resist the gravity loads, usually most structures tend to be adequate against vertical shaking. However, horizontal shaking along X and Y directions (both + and – directions of each) remains a concern. Structures designed for gravity loads, in general, may not be able to safely sustain the effects of horizontal earthquake shaking. Hence, it is necessary to ensure adequacy of the structures against horizontal earthquake effects.


Flow of Inertia Forces to Foundations

Under horizontal shaking of

So, each of these structural elements (floor slabs, walls, columns, and foundations) and the connections between them must be designed to safely transfer these inertia forces through them. Walls or columns are the most critical elements in transferring the inertia forces. But, in traditional construction, floor slabs and beams receive more care and attention during design and construction, than walls and columns. Walls are relatively thin and often made of brittle material like masonry. They are poor in carrying horizontal earthquake inertia forces along the direction of their thickness. Failures of masonry walls have been observed in many earthquakes in the past (e.g., Figure 5a). Similarly, poorly designed and constructed reinforced concrete columns can be disastrous. The failure of the ground storey columns resulted in numerous building collapses during the 2001 Bhuj (India) earthquake (Figure 5b).